The Rolling Stones will release a live concert from 1989 in Atlantic City, New Jersey during their Steel Wheels tour.

Steel Wheels Live, which was recorded at the Convention Center in the Jersey Shore gambling town, features appearances from Eric Clapton,John Lee Hooker and, from Guns N' Roses, Axl Rose and Izzy Stradlin.

This is the show that was broadcast on pay-per-view on December 19th, 1989. 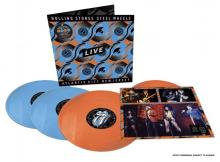 It will be released digitally, as a four-LP colored vinyl set, in a DVD and two-CD set, and as a Blu-ray and two-CD set on September 25th.

There is also a limited-edition six-disc version with the Atlantic City performance on DVD, Blu-Ray and CD, and with it comes a DVD of their Steel Wheelss how in Tokyo in February 1990, and Steel Wheels Rare Reels, a CD featuring tracks not on the core tour set list.

Lastly, there is a special double-A-sided 10-inch vinyl picture disc containing “Rock and a Hard Place” from Atlantic City, and “Almost Hear You Sigh” from Tokyo. That will be out on September 26th, Record Store Day.

About Bo and Jim